Written by ksseeds-admin on February 27, 2016. Posted in Uncategorized.

It’s still winter in the Klamath-Siskiyou, but the warm, spring-like days this February have brought out the bumble bees! Bumble bees are some of the first bees seen in the spring because they are specially adapted to be active in colder weather than most other bees.

Early emerging bumble bees are hard pressed to find flowers in February, but there are some native plants flowering already that they can utilize. I have seen snow queen or spring queen (Synthyris reniformis) and Nuttall’s toothwort or spring beauty (Cardamine nuttallii) blooming in the canyon I live in, along with several different species of willow (Salix spp.). The first Indian warrior (Pedicularis densiflora), gold stars (Crocidium multicaule) and native violets (Viola spp.) are all blooming in the Klamath-Siskiyou at low elevations, and the grass widows (Olsynium douglasii) will be blooming soon on sunny slopes and rock outcrops. For the bumble bees, spring will soon begin in earnest. 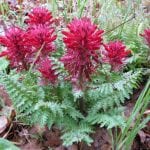 Indian warrior (Pedicularis densiflora)
Bumble bees provide excellent pollination services for the diverse native plant species in our region, and this relationship and interdependence is crucial for the survival of imperiled native plants and pollinators alike. If you want to manage your land or garden for pollinator conservation the best thing you can do is plant flowering native plants that provide pollen and nectar throughout the growing season: early season, mid season, and late season flowers. Bumble bees are classified in the genus Bombus. The Pacific Northwest is home to many native species of bumble bees, broken down into the following groups: the red-tailed group, the striped group, the black-tailed group, the whites, the yellow-faced bumble bees, and the cuckoo bees.

The Bees In Your Backyard: A Guide to North America’s Bees gives the following information about bumble bees:

The following is an excerpt from The Xerces Society’s publication: Conserving Bumble Bees: Guidelines for Creating and Managing Habitat for America’s Declining Pollinators

Competition with Honey Bees The honey bee (Apis mellifera) was introduced to North America by European settlers in the early seventeenth century. The honey bee is extremely important to our agricultural system, yet its populations have declined steadily since the mid twentieth century. Many efforts to support honey bee populations are in line with bumble bee conservation. However, recent research has shown that competition with honey bees reduces bumble bee foraging efficiency, worker size, and reproductive success. As such, bumble bees in close proximity to honey bee hives may be experiencing additional pressures in an already difficult landscape. A single honey bee hive can contain over 50,000 bees, who collectively remove hundreds of pounds of nectar and tens of pounds of pollen from an area in a single year. Whether this is testing the limits of the available flowering resources is unverified. However, there is no doubt that such a significant removal of resources must represent a substantial proportion of the available pollen and nectar, especially during a period of limited flower abundance. Klemens and Volkmar showed that the presence of honey bees force bumble bees off flowers, and change their foraging times. While reproductive success was not measured in this study, any event that causes decreased efficiency of foraging trips is likely to be detrimental for bumble bees. In addition, it has been shown that pollen is a vector for disease transmission between honey bees and bumble bees. Thus, where bumble bees are visiting the same flowers as honey bees, they face an increased risk of infection. Diseases from some pathogens can lead to fewer new queens produced by the colony. Since honey bees are present virtually everywhere there are flowers in North America, it is nearly impossible to avoid interactions between honey bees and bumble bees. However, if land managers have the option to limit these interactions by restricting honey bee hives from natural areas managed for biodiversity, it is strongly recommended.