Written by ksseeds-admin on April 13, 2016. Posted in Uncategorized. 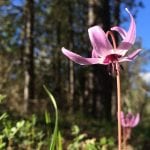 Other Fawn Lilies of the Klamath-Siskiyou Ecoregion