Pollinator habitat restoration on public land along the Applegate River

Written by Klamath-Siskiyou Native Seeds on December 3, 2017. Posted in Uncategorized. 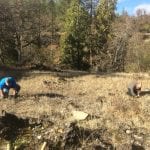 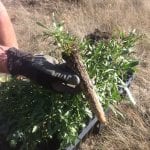 Hot rock penstemon (Penstemon deustus) plants grown at the Dorena Forest Service nursery from seeds collected by Klamath-Siskiyou Native Seeds.
The Rogue River-Siskiyou National Forest has been implementing pollinator habitat restoration projects on public land along the Applegate River. Over the last two years many sites along the Applegate River have been planted with native flowering plants beneficial to native pollinators such as bees, butterflies, moths, hummingbirds, beetles, and pollinating flies and wasps. Monarch butterfly conservation has been a particular focus of the project, and many of the native plants will provide crucial nectar resources for monarch butterflies as they migrate along the Applegate River. 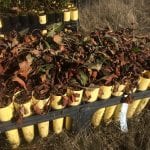 Bush pestemon (Keckiella lemmonii)
Many of these pollinator plants have been grown at the Forest Service’s Dorena Nursery, from seeds collected by Klamath-Siskiyou Native Seeds (KSNS). The seeds were collected from native pentemons, buckwheats, milkweed, western verbena, bluehead gilia, bush penstemons, and bicolor annual lupines that grow in the vicinity of the project areas, making the seed ideally suited for site-specific habitat restoration. Some of the seed was used for growing containerized plants at the nursery for out-planting, and some of the seed has been direct seeded at the project sites.

Planting native plants for pollinator habitat on public land along the Applegate River. 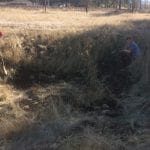 Planting milkweed for monarch butterfly conservation on public land along the Applegate River.
At KSNS, we are happy to be part of this important work. We have also volunteered to help plant some of the plants alongside Forest Service staff, Southern Oregon Monarch Advocates, Applegate Neighborhood Network, and local Applegate community members. We look forward to seeing these areas with abundant flowers and pollinators in the near future, and we hope our public land managers continue implementing projects that benefit native plant and pollinator conservation.