Written by Klamath-Siskiyou Native Seeds on December 11, 2017. Posted in Uncategorized.

People who hiked the Boundary Trail through the Red Buttes at the headwaters of the Applegate River after the 1987 wildfires reported massive floral displays on the Siskiyou Crest within the burned area. After the 2012 Fort Complex Fire, which also burned in the Red Buttes, I saw for myself the same thing: more wildflowers than anyone had seen in decades—and happy pollinators, too. The diversity and color of wildflowers responding to the Fort Complex Fire was truly staggering. Before the fire, much of the area was covered in dense stands of montane chaparral. The Fort Complex Fire burned in a natural mosaic of high-severity fire in the montane chaparral, burning off large patches and encouraging a lush growth of wildflowers where the chaparral had once been. The wildflowers benefited from the wildfire. After the Fort Complex Fire, wildflowers were blooming at the base of burned-off woody shrubs, responding to the lack of shrubby competition. Typically, before the fire, bluehead gilia (Gilia capitata) was seen only in the occasional rocky bald, but after the fire it carpeted the Boundary Trail in a spectacular display. Indian paintbrush (Castilleja spp.) and Oregon sunshine (Eriophyllum lanatum) bloomed in abundance—some areas were so thick with blooming Oregon sunshine that you could see the golden-yellow hue from miles away. Parish’s nightshade (Solanum parishii) also appeared more abundantly. This species is strongly fire-adapted and often associated with chaparral habitat. Considered relatively rare in Oregon, this species is more abundant in California. Chinese houses (Collinsia spp.) were found in dense masses on thin, rocky soils throughout the fire-affected area; however, it was phacelia (Phacelia spp.) that stole the show. Where stands of montane chaparral were consumed by high-severity fire, the area was transformed into flower fields dominated by phacelia. Over the next couple of years, we are likely to see the same amazing wildflower response within the fire-affected areas of this year’s Miller Complex Fire, which burned throughout the headwaters of the Applegate River as well as in the Red Buttes Wilderness. The majority of the Miller Complex Fire in the Applegate watershed burned at low to moderate severity, but some places, such as Azalea Lake in the Red Buttes Wilderness, did sustain some high-severity fire effects in the fire-adapted lodgepole pine forest. The trail into Azalea Lake will surely be a carpet of wildflowers within a couple of years, and it will be a boon for our native pollinators, creating colorful pollinator habitat out of the ashes. Wildfires are a natural and necessary part of the ecosystem in the Siskiyou Mountains. Because the flora is fire-adapted—having evolved with natural lightning-caused wildfire and indigenous burning over millennia—many species of wildflowers respond positively to wildfires and often produce larger plants and more abundant flowers. Wildfires can rejuvenate the landscape. Many plant species need the heat of fire to reproduce or their populations will dwindle. For example, knobcone pinecones can remain closed for 80 to 100 years without fire, and rare Baker’s cypress seeds are also released from their cones from the heat of wildfire. Intense heat can break down seed coats and clear away competing vegetation, allowing wildflower seeds to germinate and the plants to thrive and grow. Recent studies have shown that chemicals from charred wood in the soil following wildfire also stimulate seed germination and plant growth. The seeds of many wildflower species can lie dormant in the soil for decades and then germinate by the millions following wildfire. The plants may have been there long ago, but the area has since turned into chaparral or forest; after a fire the seeds finally have the right opportunity to germinate. Wildfires enhance the world-class biodiversity in the Siskiyou Mountains. The massive floral displays following wildfires are not only beautiful but are also bountiful feasts for hungry pollinators reliant on nectar and pollen from wildflowers for food. Wildfires can increase the available food for native bees, butterflies, moths, hummingbirds, and other pollinators. I look forward to continuing my exploration of the fire-affected areas in the Miller Complex Fire over the next couple of years. The flowers are going to be bee-eautiful! Suzie Savoie, Conservation Chair, Siskiyou Chapter Native Plant Society of Oregon 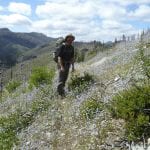 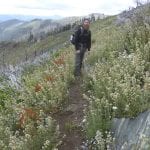 Luke on the Boundary Trail in the Kangaroo Roadless Area, on the edge of the Red Buttes Wilderness. This wonderful profusion of wildflowers followed the Fort Goff Complex fire of 2012.

An abundance of wildflower species growing along the Boundary Trail in the Red Buttes following the 2012 Goff Fire, part of the Fort Complex Fire.